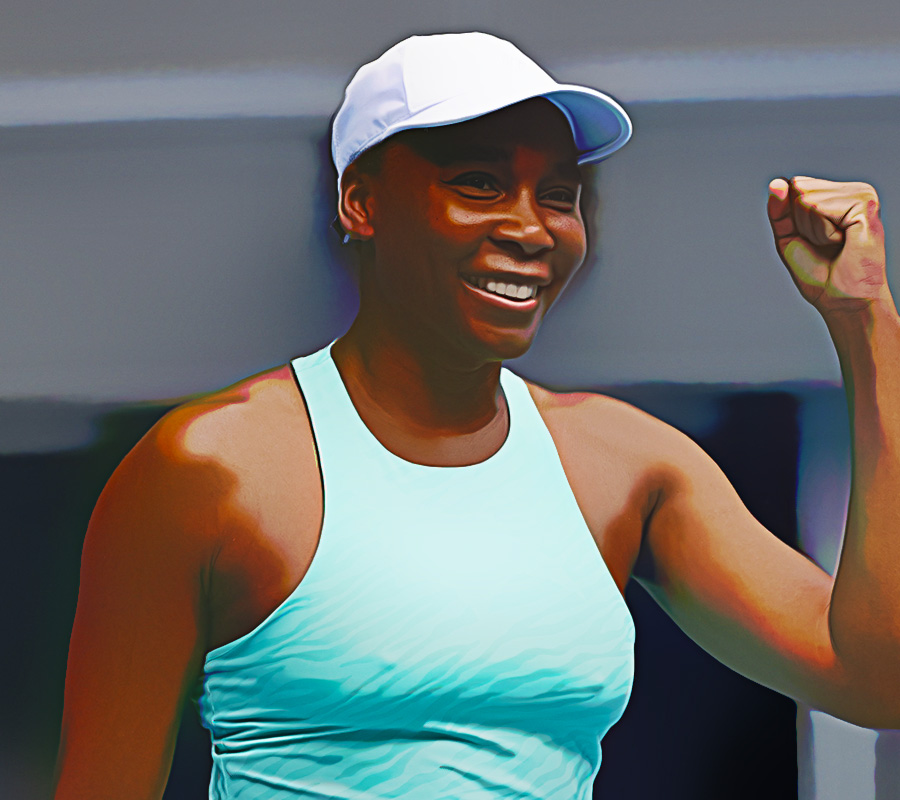 Undoubtedly one of the most influential tennis players of all time, the oldest Williams sister has had a very successful tennis career which is still going. The former number one player in the world, and the first American black woman to achieve this, has a total of seven Grand Slam singles titles and 14 Grand Slam doubles titles.

Credited with ushering in a new era of power on the women’s professional tennis tour, it’s no wonder Venue William’s net worth is estimated at $106 million in 2021.

Venus Williams was born in 1980 in California and has three older sisters and one younger. Her family moved to Compton when she was four, and it was then that both Venus and Serena began playing tennis. When she turned 10, the whole family moved again to West Palm Beach in Florida so she and Serena could attend Rick Macci’s tennis academy. Their father eventually pulled them out and took over as coach for both girls.

In 1994, Venus turned professional aged just 14. She debuted at the 1998 Australian Open against Serena in the second round, and this was the first time the women played one another professionally. Venus won the match and went on to lose to then number one, Lindsay Davenport in the third round.

Success On The Tennis Court

She began to dominate the game in 2000 when she reached the quarter finals of the French open. From here, right through to the 2001 US Open, Williams went on to win 35 consecutive singles and six tournaments of which four were Grand Slam titles. Her US Open performance was particularly spectacular when she defeated the then World’s Top 2 players, Martina Hingis and Lindsay Davenport, to win the Grand Slam. That same year at the Sydney Olympics, the athlete won a gold medal for her country when she took out Russian Elena Dementieva, in the final.

The following year Williams continued to dominate the court, defeating Martina Hingis again, and Jennifer Capriati. Her performance resulted in a career high ranking as World Number 2.  The same year, her doubles success with sister Serena continued to grow as the duo won the doubles titles of the year, completing a Career Grand Slam in 2001.

Venus secured the World Number 1 ranking in 2002 and held it for three weeks as the first African-American woman ever to hold such a position. She reached this status another two times in her career, totaling 11 weeks in the ranking all up. Williams has reached the finals of 16 Grand Slam tournaments and won five Wimbledon titles. She has played in 85 Grand Slams as of the 2020 Australian Open, which makes her the record holder for the all-time leader of either gender. She is also one of only two active women’s tennis players to have reached the finals of all four Grand Slams. The other player is her sister Serena.

At age 40, Williams continues to perform on the court with many more highlights emerging over time and between injuries. 2003 was the first time she dropped out of the top ten, after an abdominal injury and the murder of her sister Yetunde Price. After a challenging 2004, she won her third Wimbledon title in 2005 before dropping back again in 2006 with a wrist injury. Venus returned to form once again in 2007 and 2008 winning her fourth and fifth Wimbledon titles consecutively. She was ranked World Number 2 in 2010 as well as taking out Grand Slam titles with Serena in doubles.

Further injuries and illness saw Williams’ status drop again until another comeback in 2012 with Olympic gold in the doubles at the London games. She continues to return to the court with a consistently strong game between injuries and remains more determined than ever with a competitive ranking despite the challenges faced. She won an impressive $5.47 million in prize money alone on tour in 2017, which is the highest in women’s tennis.

More than an athlete, Venus continues to grow as a businesswoman with multiple ventures on the go. She is the CEO of her interior design firm V Starr Interiors and started her own fashion line in 2007, EleVen. The athlete has created a collection allowing women to enjoy an active lifestyle while remaining fashionable simultaneously. The line made its’ debut at New York fashion week in 2012, modelled by athletes as opposed to other models.

In 2009, Venus and Serena became part-owners of the NFL team Miami Dolphins. The deal made both athletes the first African-American women to obtain ownership in an NFL franchise. The following year she released her first book Come to Win: on How Sports Can Help You Top Your Profession in 2010. It was placed in the Top 5 of The New York Times Best Seller list.

Venus has also fought for her gender, becoming an advocate for equal pay in her sport. Her fight began in 2005 just after she became a four-time Grand Slam champion and led the world with a Number One ranking. Venus met with French Open officials to discuss the gender pay gap and also addressed the ITF (International Tennis Federation) Grand Slam Board on the issue. In 2006 she wrote a powerful opinion essay which landed in the editorials of The Times of London.

When Venus won her fourth Wimbledon tournament in 2007, she became the first female tennis player to receive equal prize money as the male winner. Today, equal prize money is awarded for all major tennis events.

And then there’s endorsements and sponsorships which have attributed largely to the athlete’s earnings. Venus received $10 million from partners which include Wilson, Electronic Arts and Ralph Lauren among others. At the young age of 14, she signed a promotional deal with Reebok and in 2013, she signed a deal with Nike which was worth a minimum of $40 million, and came to twice the amount based on her performance.

Put it all together, and it’s easy to see how Venus Williams has a net worth of $95 million. And it’s also clear she’s earned every cent. Considering she’s played a total of 1073 singles matches throughout her career, we can estimate average earnings of a whopping $88,500 for each game. No wonder she’s still going! She has played in 85 Grand Slams as of the 2020 Australian Open, which makes her the record holder for the all-time leader of either gender.

The athlete and businesswoman remains unstoppable on and off the court with much more to come from her hard work and commitment not only to the sport of tennis, but for women’s rights and equality among many other things.